Some of the  most dramatic seafaring photographs are of shipwrecks. Pictured here are the White Star Line’s SS Suevic that ran aground in fog in 1907, and the Queen Margaret that hit the rocks off Cornwall in 1913.

Royal Navy ships were wrecked too, of course. HMS Gladiator collided with an American steamship in a snowstorm off the Isle of Wight in 1908:

If you know the name of a ship that was wrecked then a number of websites can help you find further information, most notably Wrecksite.

The official Wreck Reports for many commercial ships are available in full online (from 1876), and often provide a lot of detail about events, as well as listing victims and survivors. They are indexed by year of wreck, and then alphabetically by ship’s name. For example, the report for the Dunholme in 1891 explains that the loss of the ship was not the fault of her captain, William Sherborne (pictured) – his ship was rammed by another vessel in the fog. But it was a terrifying experience in which sixteen of Captain Sherborne’s crew were drowned; William was lucky to survive.

Elizabeth Merryweather was not as fortunate as Captain Sherborne. She was a passenger on the SS Mohegan in 1898 when it steamed onto the rocks near Falmouth. The official report describes how this large ship ran ashore and sank so quickly – in about 15 minutes – that there was deplorable loss of life. Many bodies were so badly damaged that they could not be identified and had to be buried in a mass grave.

If you’re looking for a ship sunk by enemy action in the First World War, then there is a list of them in date order here. The first photo below is the last known picture of the officers on board SS John Hardie before it was sunk by a U-boat in 1915. For vessels destroyed by German submarines during the world wars, the Uboat.net site will give you valuable extra detail.

Arthur Cooper is the man with the pipe in the middle of the five men in the second photo. Arthur and 61 crew mates died when his ship, the Nottingham, tried to ram a U-boat in the middle of the Atlantic in 1941. Men who died in the merchant service during either world war are listed on the Commonwealth War Graves Commission website. 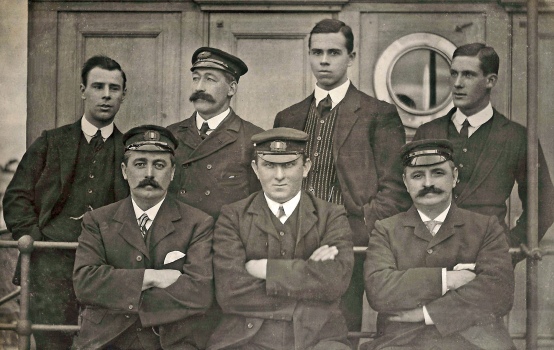 During the Victorian era, it was common to issue photographs to honour those who either died at sea or miraculously survived famous shipwrecks. Some of the survivors became celebrities for a while after the wreck – giving talks, interviews, and signing autographs. The photos below show Captain Edward Knowles who drowned when the Northfleet sank (English Channel, 1873); James Curran, who survived when HMS Victoria collided with another ship killing over 350 men off Lebanon in 1893; and David Main, John Munro, and John Wilson – the only passengers to survive the SS London disaster (Bay of Biscay, 1866). 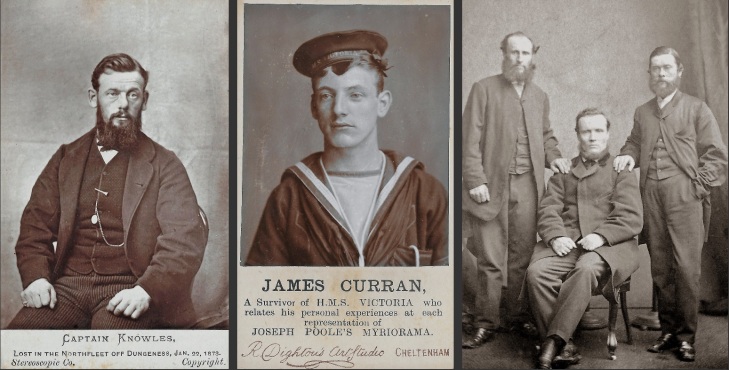 If you’re interested in shipwrecks, you may like to know about my forthcoming book on the wreck of the SS London, due for publication by Amberley Publishing in November 2016. To great consternation, this famous luxury passenger liner sank in the Bay of Biscay en route to Melbourne in 1866. All the passengers died in the tragedy except for the three in the photo above, who had a remarkably lucky escape.