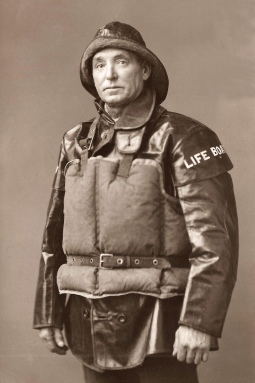 What to Look for

There was no RNLI  uniform, so notice the differing arrays of clothing and headgear even though only 15 years separates all four photos. However, in about 1900 the RNLI introduced a cap badge for coxswains as worn by James Haylett, and enlarged below. It consisted of an anchor in a gold circle surmounted by a crown. Until about 1930 the letters R-N-L-B-I were used because the word ‘life-boat’ was then hyphenated.

Two of the coxswains are wearing medals, and in fact the receipt of an award was a common reason for a photo to be taken of an individual. RNLI medals have a distinctive clasp that joins the ribbon to the medal itself, which consists of a pair of dolphins. These distinctive shapes often stand out in photographs. The RNLI medal was instituted in 1825 and there were three classes: gold, silver, and bronze. A helpful book describes all those awarded before 1997: Lifeboat Gallantry: The Complete Record of Royal National Lifeboat Institution Gallantry Medals (Barry Cox, 1988). The reverse of the medal, depicted here, bears the wonderful legend “Let not the Deep swallow me up”.

In 1861 the RNLI introduced cork life-vests as shown in James Cable’s photo, but they were replaced by kapok lifejackets of the kind sported by Thomas Rimmer, above, from about 1904. This can be a helpful dating clue in photos of this era.

Group photos were also commonly taken. Often these were ‘staged’ for publicity purposes and sold as postcards to raise money for the local lifeboat. Commonly, the lifeboatmen are shown sat in their lifeboat, launching it, or assembled by the lifeboathouse.

A helpful dating clue with these photos can be the RNLI logo as shown in inserts to the above photos. An oval emblem of various designs was painted on the bows until about 1920 and then the more familiar ‘flag’ design was adopted. The first photo above is of the Great Yarmouth lifeboat John Burch in about 1910, the second is the Poole lifeboat Harmar in 1934. In these types of photo, the coxswain is usually standing at the tiller if he is in the boat and the bowman is furthest forward. If not in the boat, the coxswain is typically in the middle of the front row and his cap badge, if worn, often stands out.

Note that there were, and still are, many independent lifeboat stations not operated by the RNLI so deciphering photographs of personnel in these services may be harder.

If you’re interested in the history of the lifeboat service, then you may like to read my novel Lifeboatmen. It was shortlisted for the Mountbatten Maritime Literature Award and tells the story of a lifeboat crew that failed to live up to public expectation during a hurricane in 1866. As a result many sailors were drowned.

You may be surprised to learn that the novel is based on a true story that provoked much media attention at the time, and even a public inquiry. Did the lifeboat crew manage to restore their reputations during subsequent rescues? You can read the first few pages as a preview here or on Amazon.